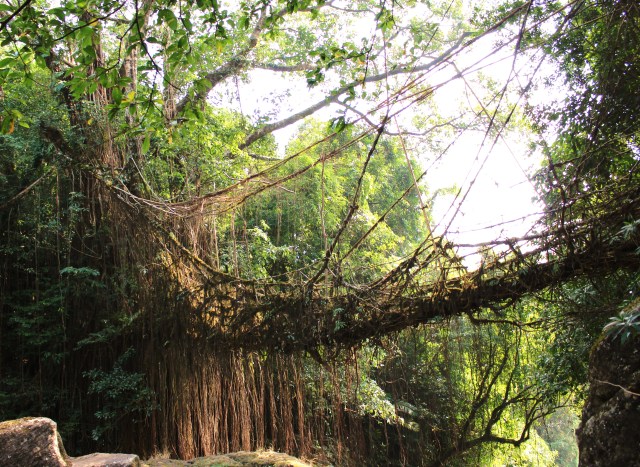 In one form or another, The Living Root Bridge Project has been underway since 2015. Here, I’ll set down some of what I feel have been its main accomplishments.

It’s important to note that this endeavor is ongoing. In attempting to shed light on a phenomenon as varied and widespread as the creation of botanical architecture, there’s no clearly defined finish line.

WHAT HAS THE LIVING ROOT BRIDGE PROJECT ACHIEVED?

1: The Living Root Bridge Project constitutes the largest and most comprehensive publicly accessible database of information and imagery pertaining to botanical architecture in existence.

The project has surveyed and photographed over 100 living root structures. For many of these, the data and imagery presented on this site continues to be the only readily accessible source of information.

2: The Living Root Bridge Project has served as a vital means of connecting researchers interested in botanical architecture from outside of Northeast India with guides and local villagers in Meghalaya. This has facilitated more study of the phenomenon, while also encouraging its preservation at a local level.

In this respect, the project has achieved its stated goal of providing a foundation of information on living architecture that specialists can build up from.

3: Data collected as a part of the project has been incorporated into the first peer-reviewed scientific paper on living architecture, (authors: Prof. Ferdinand Ludwig, Wilfrid Middleton, Friederike Gallenmüller, Patrick Rogers, Thomas Speck) soon to be published at Nature.com.

4: Articles about The Living Root Bridge Project have been featured in Inhabitat.com (here and here), Hyperallergic.com (here) , Avaunt.com (here), and other news sites. These have helped broadcast the message that Living Architecture exists, and needs protection, to people all over the world who might not have even heard of Root Bridges.

These books have also been important in getting the message out to a wide audience that Meghalaya’s botanical architecture is an important cultural resource, and in need of conservation.

The conservation situation faced by my living root bridges has improved, but there’s still a great deal more work to do!