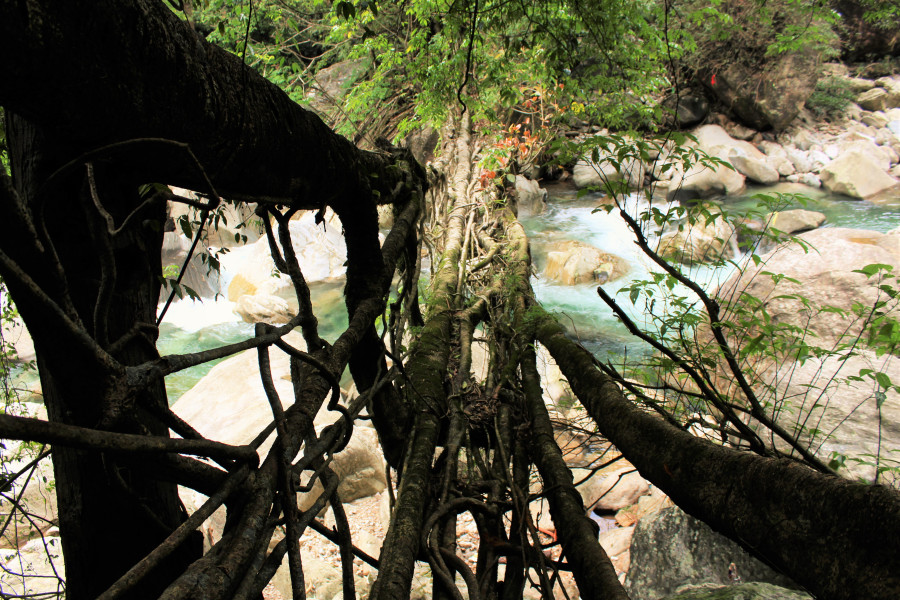 My name is Patrick Rogers. I’ve been traveling on and off to Northeast India almost every year since I studied abroad with the University of Delaware way back in 2009.

I first had the idea of the Living Root bridge Project after a month-long solo trek I took across much of the Indian state of Meghalaya in 2015. During that long walk, I saw that there was much more to the practice of creating botanical architecture than one would think simply by looking up “Living Root Bridges” online. For one thing, rather than there being only the handful of living structures that one can readily find information about, I realized that there were in fact dozens and dozens still standing (the full number is unknown), and that they were much more varied in their designs, their settings, and in the ways in which they were grown, than was widely known. However, crucially, online there was virtually no mention of the fact that, in most of the places living root architecture is found, the practice of creating it is fading out. It seemed to me that Meghalaya’s botanical architecture was simultaneously much more interesting, but also exposed to a greater level of threat, than was commonly known.

The Living Root Bridge Project is my personal way of addressing this issue. My central argument is that if nobody knows how much there is to the practice of botanical architecture, or understands the threats it faces, then it will largely disappear, and be reduced to the few very isolated pockets where tourism has created an immediate, though local, incentive for its preservation. Hence, I wanted to create an easy to access platform on which I would present all of the information that I’ve found on the subject, in the hopes that this may make a small contribution to the survival of the practice as a whole.

I make no pretense of being an expert, and I don’t view the information being presented here as the definitive word on root bridges. My view is that, in order to truly create a comprehensive understanding of botanical architecture, it would take an alliance of specialists from different fields: engineers and architects who could study the bridges on a structural level, botanists who could examine the organisms they are formed from, linguists and anthropologists who could analyse their cultural context, and, most importantly, local village and eco-tourism guides who could advocate for the protection of the structures on a day to day basis. This project is therefore, more than anything else, simply meant as a way of communicating that in the hills of southern Meghalaya there is something very much worth looking into.

To Support The Living Root Bridge Project, click here to check out my Patreon Page